M5StickC PLUS is powered by ESP32-PICO-D4 with Bluetooth 4.0 and WiFi and is an upgrade of the original M5StickC with a bigger screen .It is a portable, easy-to-use, open source, IoT development board. This tiny device will enable you to realize your ideas, enrich your creativity, and speed up your IoT prototying. Developing with M5StickC PLUS takes away a lot of the pains from the development process. M5StickC Plus is one of the core devices in M5Stacks product series. The compact body is integrated with rich hardware resources, such as infrared, RTC, Microphone, LED, IMU, Buttons, PMU,etc. Improvements from the regular StickC are a buzzer, bigger screen (1.14-inch, 135 * 240 resolution LCD Screen) and more stable hardware design. This revision increases the display area by 18.7%, and the battery capacity from 95mAh to 120mAh. It also supports the HAT and Unit family of products.

UnitV/M5StickV/M5StickC/ATOM may not work without driver in some systems. Users can manually install FTDI driver to fix this problem. Take the win10 environment as an example, download the driver file that matches the operating system, decompress it, and install it through the device manager. (Note: In some system environments, the driver needs to be installed twice for the driver to take effect. The unrecognized device name is usually M5Stack or USB Serial. Windows recommends using the driver file to install directly in the device manager (custom Update), the executable file installation method may not work properly). 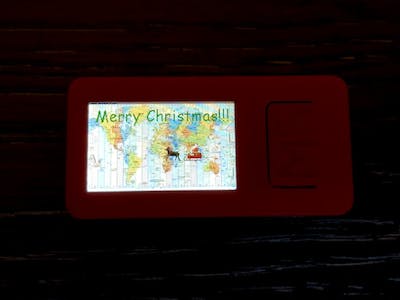 Santa Tracker using M5StickC Plus for an M5Stack Christmas Who isn't waiting for Santa? Well, using an M5StickC Plus, you can track where is Santa is while he is delivering gifts.

I've been using my M5Stick with lots of the example code it comes supplied with via the Arduino dev kit, and been experimenting with several hardware modules that I bought after getting it.

There's plenty of projects to do, such as remote controller using ESP-NOW direct messaging for my little BugC (Zippy little 4 motor robot), interfacing the Joystick unit to it, creating pritty animations with the LED display board Hat (full RGB color!), and also creating a super small robot arm with the C-Back Hat (4 servo driver).

They all work directly with the M5Stick and I've used it much more than my other M5Stack units, like the Core 2 and E-Paper. It's just so fun!

It's cheaper than the Core Grey and similar units, while still having a screen, buzzer, IR emitter, and inertial unit.
Unlike the slightly cheaper units like the Atom and Atom Matrix and Lite, it's got an in-built battery.

I think it perfectly hits that sweat-spot of features and price - and is a good starting device to begin your M5Stack collection with. =D

This is an awesome product. What sets it apart from others in similar price range is that it has CE and FCC certification, so it can be deployed commercially. I wish all the sensors also had the less complicated SDOC certification so they can also be commercially deployed. Nevertheless it is a complete, reliable and ready to deploy IoT product, with very good documentation.